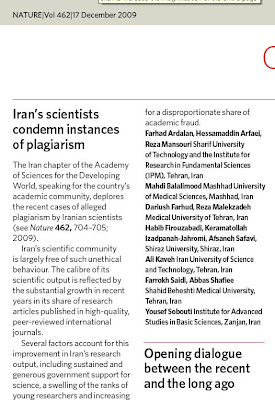 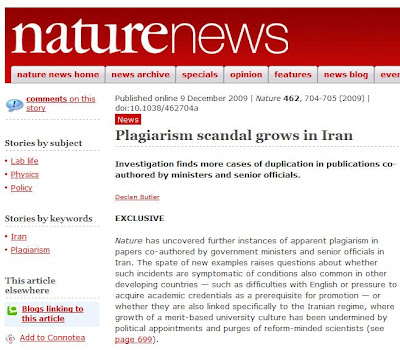 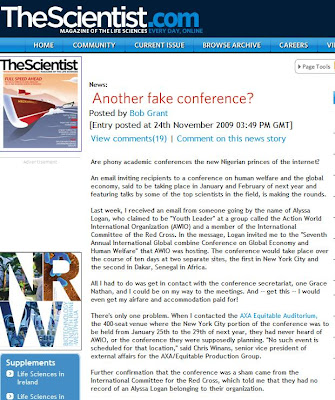 On reading the following article in IRNA

I am persuaded to convey the following two suggestions for consideration. You may even wish to devote a blog article to it. If so, I hereby grant the permission to reproduce, in full or in part (with a mention of the source), the following in any blog that you may write in future regarding the subject matter.

First, I sincerely believe that the scope of the present blog is too narrow (more precisely, with the passage of time, it appears to have become narrow) and needs to be broadened. One cannot bring about a positive change in any community (here, the academic one) by merely reporting on the deplorable events taking place in that community. I believe that the blog should accommodate a major section where contributors write about issues from which one can derive a sense of pride; a sense that it is not all doom and gloom; a sense that while there are some who commit fraudulent acts, there are also some who work honestly and conscientiously.


Second, recently I was able to watch the Iranian television series «Taraneh-ye Madari» (sadly, I must to confess, on one of the probably not-so-legal Internet sites specialising in Iranian films and television series), directed by Mr Hossein Sohelizadeh. As you may be aware, some scenes of this series show events taking place in a particular lecture room at some university in Tehran (it is one of the newer universities which I do not know). My memories of these scenes, combined with the issues raised in the above-indicated article published by IRNA, were the two things that prompted me to write this letter. In two or three of the scenes, one sees a university professor teaching some elementary course on electricity and magnetism to first-year university students.

Assuming that these scenes are constructed on the basis of reality (that a lecturer or a university professor has been advising the writers and the director on how university lectures are delivered
now-a-days), I am inclined to believe that these scenes reveal to us (at least to me) what may be wrong in teaching at some Iranian academic institutions, and what can be done to correct these wrongs. In one scene, the professor apparently talks about the electric field due to a point charge (in another one he talks about the EM waves emanating from a source at some long distance from the observer), and his way of conveying the details is remarkably reminiscent of the way some 100 years ago reading and writing were taught at traditional Maktabs (actually, the television series «Ruzegar-e Gharib» provides a vivid image of how teaching took place in one such Maktab in Tehran): learning by memorising, without any critical element built into the process. The professor presents the subject under discussion in such a way that any impartial observer would wonder why any intelligent student would want to study this subject, or even why an intelligent student would want to sit through the course at issue. Remarkably, the first-year student Pouya proves to be a far better teacher than this particular lecturer --- in one of the scenes, we see him teaching his fellow students some matrix algebra, and he does it rather well (although I discern some remnants of the reprehensible teaching method of Pouya's teacher in Pouya's teaching): there is life and conviction in his words.

This contrast between the teaching methods of a relatively old lecturer/university professor (someone in his forties or early fifties) and a young individual (an 18-year old fresher, who incidentally always reminded me of the young Bill Gates) may suggest that due to a variety of reasons (e.g. the availability of the modern communication systems, such as the Internet, the messaging habit of the young with their mobile phones) the younger generation may be more savvy at communicating.


What can be done to improve teaching methods? Here is one suggestion. I believe that major academic institutions in Iran should establish prestigious Chairs (named after so many great names that Iran is so rich of --- one may think of The Khayyam Chair in Mathematics, The Jamshid Kashani Chair in Astronomy, or even Computer Science, or Computational Physics, etc.), and invite first-class university teachers to these Chairs, with the explicit requirement that during their tenures (which may extend a period of 3 months) these people provide a serious course on a serious subject matter. It is important to bear in mind that "big" names are not always the best teachers; it is therefore important not to fall into the trap of spending a great deal of financial resources on e.g. a Nobel Laureate who actually is known to be a mediocre teacher; it is far better to appoint an individual to one such Chair who is known to be a good teacher. I name one name: Professor John Cardy of University of Oxford is a rare breed of a first-class scientist who is also a virtuoso lecturer (Professor Ian Affleck of University of British Columbia, Vancouver, is yet another one). He uses blackboard in exactly the same way that a first rate army general uses the battle field; nothing that he writes on the blackboard (yes «blackboard», the only medium that in my opinion is suited for proper teaching --- it provides the students with the opportunity to see with their own eyes a master at work) is unrelated to what he talks about an hour later.

I believe that if major universities in Iran would arrange a continuous flow of scientists of this calibre through Iran's academic system, the undertaking will revolutionise many aspects of science in Iranian universities. Of course, my statement should not be misconstrued as suggesting that Iran had deficit in first-class teachers/scientists. My statements merely reflect my admittedly narrow perspective on the state of the academic education in Iran, mainly derived from the contents of the above-mentioned article published by IRNA and the assumption that the relevant scenes from the above-mentioned television series «Taraneh-ye Madari» may be representative of what in reality may take place in some lecture rooms of some institutions of higher education in Iran (I take this artistic depiction of lecture rooms rather seriously, since the correlation in a number of events in the above-mentioned scenes reveal a great deal of information to me. Examples: the way students take notes is revealing --- they appear utterly passive and not engaged, which, given the quality of lecturing, does not come as a surprise to me; the lecturer asks a supposedly difficult question, which Pouya supposedly answers by scribbling an incomprehensible mathematical formula, involving sines and cosines, on black board, without uttering a single word, followed by a statement of deep admiration by the professor regarding the intellectual prowess of Pouya, which suggests to me the entertainment by the professor of a very strange view of what constitutes true understanding --- the *form*, as reflected in the impressive-looking mathematical formula on blackboard, proves to take precedence over what can be expressed intelligibly and, importantly, in a way that can be understood by all present in the lecture room; I was depressed to witness the awe inspired in the professor and students alike by seeing Pouya scribbling an impressive-looking formula on blackboard, without critically asking "Now, what does it all mean?".). After all, there must be a fundamental reason for why only a small fraction of the top-3000 students entering universities in Iran are attracted to basic sciences.